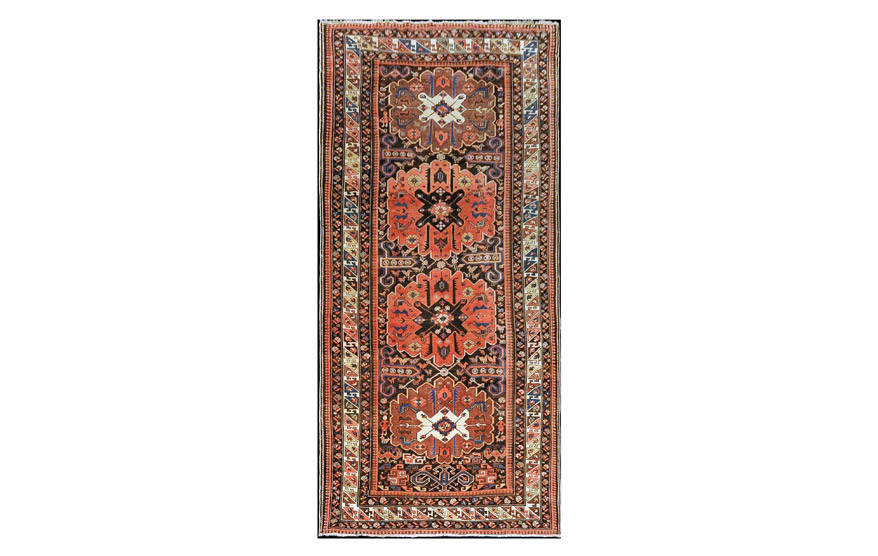 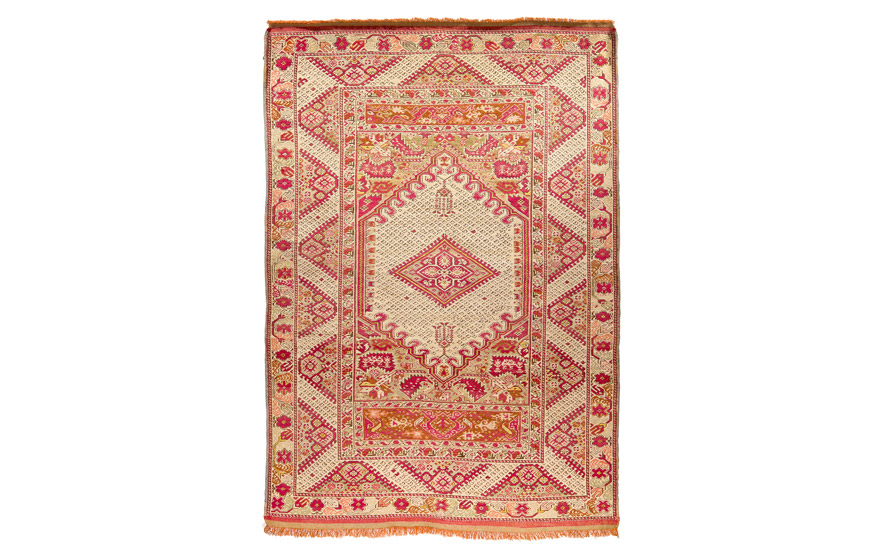 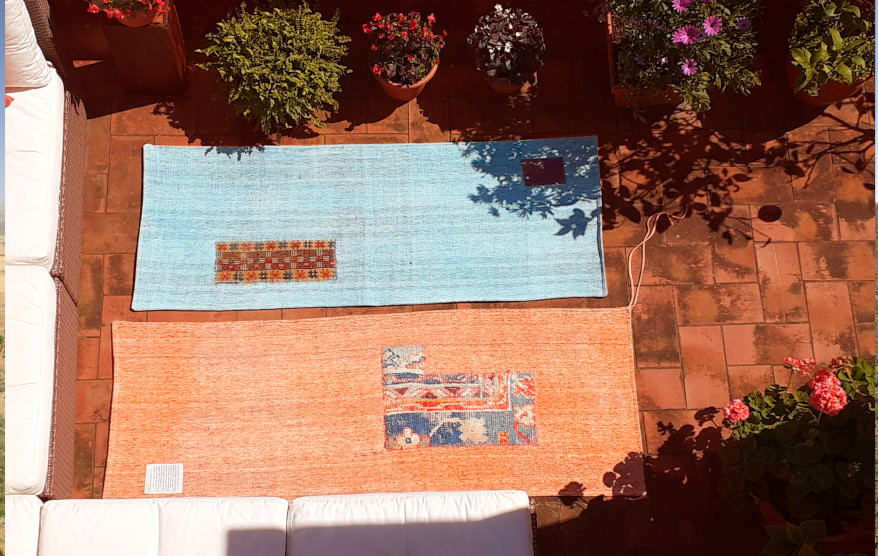 Ghiordes  (nowadays known as Gördes) is a town located 180 km far from Smyrna.
It was a very important center of carpet production during the Ottoman Empire.
From this place comes the name of the Turkish knot, Ghiordes or symmetrical knot

The carpet we introduce today, the Kis Ghiordes, dating back to the late 19th century and in very good condition, its size is 135 x 193 cms. and have a density of 120,000 knots per sqm (approx.). The knot is obviously ghiordes, and both, the hair and the weft and warp are 100% wool.

The Kis-Ghiordes ("kiz" means young girl) or "bride's carpet" were rugs woven by the young girls who were going to get married and these rugs were part of their dowry. 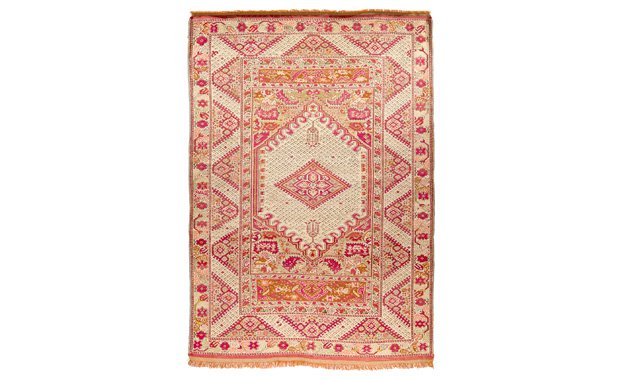 The design of the Kis is very characteristic in these carpets and has a basic scheme shown in the next illustration. From here, variations appear more in the central field than in the borders. According to Gans Ruedin in his book "Le Tapis de l'Amateur", this pattern comes from Kara Osman Oglou, who was the creator of the original design. 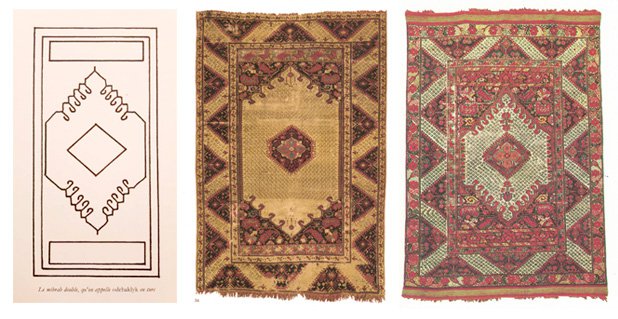 The design of the carpet consists of a rectangular central field surrounded by a peculiar zig-zag border, which is the first thing that catches the eye. It is a very wide border composed of 16 toothed triangles, and inside of them stands out similar flowers to those of the central medallion. The background of this ivory border contains motifs in the form of small leaves that also appear in the central field. This big frame is enclosed by two smaller ones, full of stylized floral motifs. 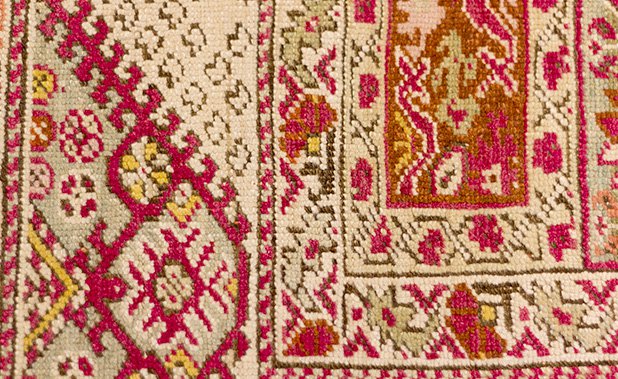 The center of the carpet is composed by a rectangle that contains several geometrical shapes,  small rectangles at the ends and an hexagon in the center. It is curious to observe the stylized floral motifs located in these rectangles at the top and bottom. We can also observe the presence of  the boteh motif (paisley) and stylized leaves in the triangles of the corners. 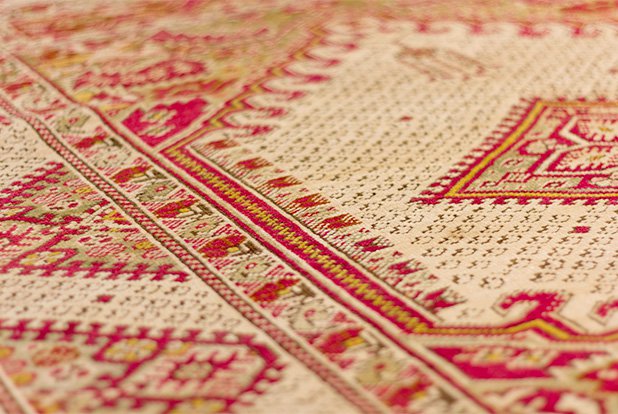 In the central field, the diamond-shaped medallion highlights with a 4-leaf clover in the middle of the carpet. This medallion is surrounded by small geometrical hooks that face the large ones closing the hexagon.
The two lamps stand out with quite a delicacy at the ends of the hexagon. Don’t forget that we are in front of a prayer rug with the peculiarity of having a double and symmetrical mihrab. 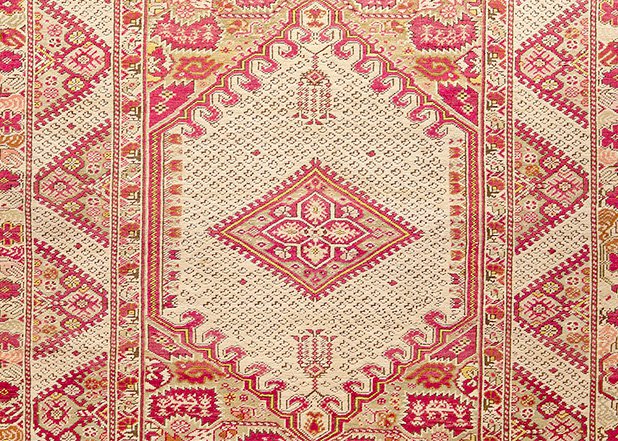 To give more strength to the set, the contrast of the light dotted area of small leaves is used as a base to highlight the central rhombus. From a distance, it seems that the medallions are layed on top of a light carpet sauteed with small leaf motifs. A surprising optical effect. The use of natural dyes and the patina get over time also contributes to it.
Have you noticed the appreciated relief? It is caused by the use of iron oxide to dye the brown color, which over time rusts and corrodes the wool. 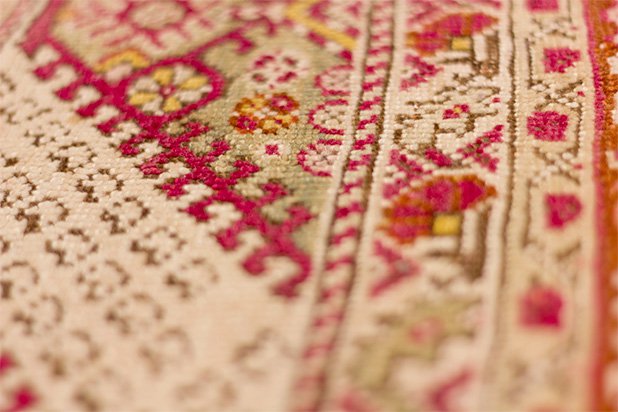 In short, we love this Kis Ghiordes for the harmony that it shows, as per the drawing and the distribution of shapes and the weaver chosen matching colors. Compared to other pieces of the same origin, this one has an especial fineness of the weave and the balance of its elements.
We hope you have enjoyed this piece as much as we do.